I said evacuation!  Yeah.  No deal reached by midnight so I put on my parachute and jumped off the cliff and into the abyss.  No way was I going to wait to be pushed.  The abyss seemed oddly familiar to me.  I looked around and saw there were only about 14 of us.  Where was everyone?  I got a text the following day telling me that the fiscal cliff was averted at the last minute.  Well no...it was after the last minute, right?  What really shocked me was the fact that my phone worked in the abyss.  It rarely has signal.  We got busy climbing out and I was glad to have my little multi-tool with me.  Made it to the top and it was as if nothing had happened.

Saw Matt and Deb and the kids yesterday before they flew back home to Florida.  Mmmm.  Warmth.  Oh.  Did I tell you we broke a record set in 1878?  310 consecutive days of temps above 32 or 34 degrees.  That would be fine except that it means no snow.  It's January and STILL no snow?  Maybe it is the end of the world.

A word on Maggie Mae.  She is about 7 1/2 months old.  We had to put our other lab down in July of 2010 or 2011.  And she was awesome!!!!!!  She belonged to my son and his wife.  They worked long hours and so we got her when she was about a year old.  Best dog ever.  Maggie is also very smart like Belle was.  I know Maggie is just a pup but I take it personally.  I have tried everything.  She sees me as a "playmate".  I have even tried the dominance thing where you tell them NO (when they do something bad) then get on top of them and push them into the floor.  Oh,....she thinks this is great fun.  I know she will grow out of it.  I know.  It's just that I can't be fighting depression and her at the same time.  I know she will grow up and be the one comforting me by licking the tears from my eyes.  But as for now......?  How'd you all like some dog stew?

And so it goes.  I was trying not to take a nap yesterday but then Chuck came to the door while I was out smoking, and pulled down his boxers and.....ARE YOU KIDDING ME?  He has never done this before.  I am the one who always hollers to him out the window and when he looks, I lift up my shirt.  So yeah.  I ended up taking a "nap."  Just woke up a couple hours ago having slept 8 hours.  It was 1 AM when I awoke.  I really don't think I can go back to sleep.  I want to go work up in our office-year end and all that-but it is right next to our bedroom and I don't want to wake Chuck up.  I could do laundry.  It's in the basement.  And in case anyone wants to know what I want next Christmas.....that would be a ranch house with a laundry room  RIGHT THERE!  No hauling clothes up and down 2 flights of stairs.  Don't need crown moulding or a viking oven or sub-zero fridge.  Hell, I'd even be OK with just an outhouse if I could have my laundry RIGHT THERE.

Guess I'd better get back to it here.  If I don't smoke those cigarettes, no one else will.  Peace. 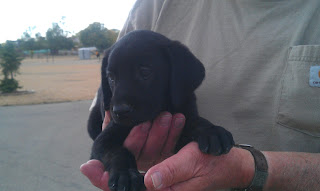 This was Maggie Mae at 7 weeks old.  See how cute?  Should have gotten her teeth pulled right then and there!
Posted by middle child at 3:21 AM

The dog should be much easier to train than the husband. Husbands always take longer.

It sounds like we have the same terrible sleeping thing going on. I went to sleep yesterday at 4:30pm and got up around the same time. It is hard getting things done and not waking people up.

I am running to a window right now!

So cute! :) Well, Maggie Mae just wants to kick your depression outta ya, so you've got to focus on her after all!

Maggie Mae is so cute Middle Child and hopefully she brightens up your life, enjoy your cigarettes too.

PLAY WITH HER!!! Pups are like children and need to chew on things. Get her some treats, get her some leather chew toys. I'd say at this point that boredom is the enemy.

A puppy. I keep thinking how happy my boys would be to have a puppy. Should I????

Hmmmmmmmmmmmmmmm ... were you doing something that I wouldn't do? Didn't think so. ;0)

The dog thing...it will work out.
In the meantime...show her "what for". Pin her down and show her the fire in your eyes like you would Chuck when you are pissed at him...that is if he were hog tied. LOL
(((hugs)))Pat

Hey Middle Child...not to make light of you and Maggie May but visualizing you saying NO and pouncing on top of her to push her down and her thinking it's play is sort of cute. And I love what Ms. A said...