Should have posted this last night.

I was over it last night.  Sitting 30 minutes at a dead stand still on the tollway gave me time to think.  Then to see the cause of the delay,.....a 2 car accident in which one car burned and the other was rolled over into oblivion kinda puts things into perspective.  I was sure no one could survive but I checked on line and saw that one person was air-lifted to the hospital where my daughter works (serious burns).  And four other people were taken by ambulance to area hospitals, none of their injuries were determined to be life threatening.  Prayers do work.

It is finally not in the 100's or even in the 90's today. Notice I did not say cooler because 80 degrees is still too warm for me.  There is a 15 MPH breeze.  Still too warm/humid to open up and turn off the air conditioner.  We did open up last night though. Will probably open up tonight too because it is s'pose to be in the 60's.  That alone is cause for celebration!

Josh's party was really fun!  Dawn's kids canceled at the last minute.  Remember the bad blood between her and her brother's wife.  Everyone was pissed including me.  But later I texted my daughter and they went to her husband's sister's to celebrate the 4th of July which they had cancelled due to the excessive heat.  And a good part of this is due to lack of communication on the part of my daughter, my son and their dad.  Especially my daughter and my ex.  Odd considering that I communicate honestly, openly and directly.  Not my problem, (thanks Mary/my therapist.)  The kids were on the slip and slide when I got there.  Then they came in and we ate - Jennifer's awesome chili - because that's what  Josh wanted.  They went outside where an extremely creative obstacle course was set up and the kids were timed.  John and Jenn come up with the most amazing things for the kids to do!  They play Iron Chef and that Minute to Win It show.  My husband did ask me why I was mad as I left yesterday saying he can't read my mind.  This is a true expectation that women have of their men.  It's like, "They should just know!"  It is a miracle that he even asked that. My bad that I was too mad to even tell him.  I am not excusing his behavior that I wrote about last night.  I am just saying........  He also called telling me not to take the toll road home as they were still investigating the accident scene.  And he told me to drive safe.  See how easy it is to please me?  I am not a difficult or demanding person.

We went to church this morning though we almost didn''t because his breathing was bad.  He gets this clumps of phlegm in his throat that he can't get out.  He did call his son and cancel.  Best for all concerned.  Hunter feeling sick and Matt and family flying out tonight.

So....tomorrow is the dentist which isn't really bad.  I often just want to go to sleep with him in the chair.  And I feel so good once I am done.  Then psych for a med check then will call my friend -who is visiting from Arizona - to have her and her husband come out to visit.

Nothing new and perhaps boring for readers but it is my diary and......that's how I roll! 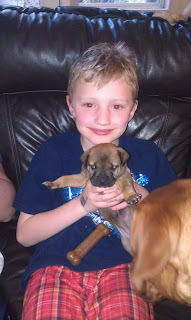 An awesome birthday for Josh: was that puppy a birthday gift?

Horrid accident. There was a time in my life when I drove ambulance. Simple accidents can be killers; people can walk away from horrid scenes (particularly if they have been wearing seat belts).

I hope you are feeling more settled in the "cooler" weather. We're in the mid 80s today, and the is way too hot for me (particularly in my fur coat, with which we Bears a "blessed" year round).

Hope you meeting with your doc, and with your friends, both go well.

There is nothing like seeing an accident to make us feel very thankful. Love the pic of Josh and his puppy.

Awww... he's so cute!!! Love the puppy too! Was it a present? I'm glad you're feeling better about things today. Sometimes it takes the light of day to help. Have you ever told Hunter how you feel about the "family is blood only thing?" Without being angry... telling him it hurts?
I hope you have a wonderful day. Oh, by the way... those little dogs would still be great pets, fragile or not... you know? :)

So glad you're feeling better today. I hope that feeling continues through the week for you.

Oh, and look at the mommy dog making sure your little man is careful with her baby. Ahhh.

Good luck with all your appointments. We have one tomorrow to make sure my husband doesn't have bladder cancer, my mammogram is Tuesday, the dentist Wednesday and the veterinarian is scheduled Thursday.....unless my husband has more tests to undergo.

Life can be overwhelming.